I made the Strip Steak with Potato Tian and Caramelized Brussels Sprouts Sunday night, and it was another great dish.  Also, I learned that it is not “brussel sprouts”, but “Brussels sprouts”.  Good to know, been saying it wrong for decades.  Thanks spellchecker!

Anywho, I had big problems with the timing of this.  The tian needed longer than 30 minutes in my oven, and was done after my husband and I had finished our Brussels sprouts and steak.  Even so, it was a delicious meal.  Hubby helped with

most of the chopping while I prepped everything else.  With both of us, it took 45 minutes, not including the extra 15 minutes we cooked the tian.  I blame the giant sweet potato!  Recipe said it would take 40-50.  No new cooking techniques in this one, although I did learn that what a tian is, a “rustic French preparation of vegetables as well as the name for the shallow earthenware dish in which they are cooked”.  I was very glad Plated included the aluminum tian, because I definitely did not have one on hand.

I was terrified of burning myself on the pan that had been in the oven with the steak, so I put a potholder on it.  I felt like there was a lot going on at the same time.  I had to be mindful of the tian (which ended up needing more time), the sprouts, the sauce, and the steak all at the same time.  I had 4 different mental timers in my head set to go off at different times. 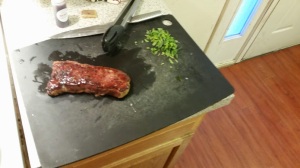 Here is the tian after I took it out of the oven (the first time) along with the yummy red wine sauce.  I think that the sweet potat

o was just too big, and that’s why it took so long.  I made one finished plate, before tasting the potatoes and putting them back in the oven. 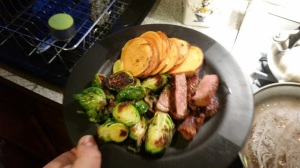 And here is my sad tianless plate, as well as my feet and my dog’s nose.  The potatoe

s were delicious when we were finally able to eat them, but I would have liked being able to eat everything together.  Overall, it was a good dish, and I would order it again if it was

If you are interested in Plated, please use my referral code so we both get free meals!! https://www.plated.com/invites/0363c7